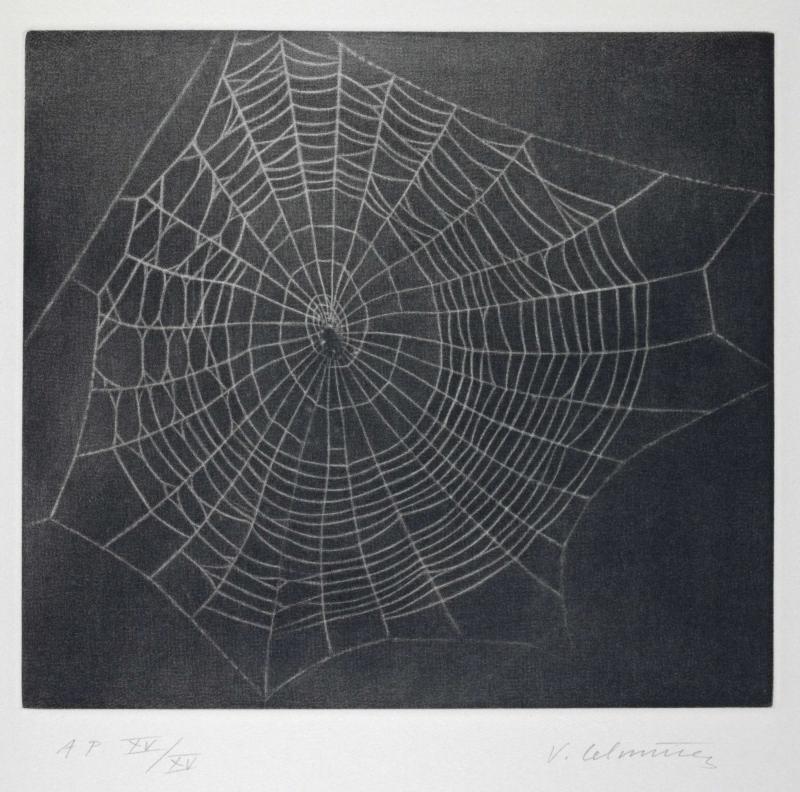 The Latvian-born artist Vija Celmins (b. 1938) uses a variety of media including charcoal, graphite and erasers to produce exquisitely intricate work which includes paintings, drawings and prints based on photographs of natural phenomena, notably the sea, deserts and the night sky. Her painstakingly slow method of composition is characterised by the extraordinary precision of her approach, and her persistent return to certain subjects. Based upon close observation, her delicate-seeming work addresses subjects that are powerful, timeless and seemingly complex beyond our comprehension.

The seminal drawing 'Web #1' in ARTIST ROOMS is typical of her apparently fragile, ephemeral images and is the first of nine works on the theme of the spider’s web made between 1998 and 2006. It is accompanied by a series of four ‘web’ prints from 2001 and 2002. These images echo the web-like construction of the universe, another of the artist's preoccupations. Among other works in the collection are a series of prints from the 1980s, 'Concentric Bearings', and two negative images of night-skies in which the sky appears white and star formations are transformed into black markings. All these works focus on something small and individual in the context of vastness. The images they depict seem fragile because they record a specific human glimpse through a telescope or camera which is ephemeral and frozen in time.

Tate and the National Galleries Scotland would like to thank the artist for her generosity in donating the aquatint, mezzotint and drypoint on paper ‘Alliance’, the mezzotints ‘Web Ladder’, ‘Starfield’, ‘Divided Night Sky’, ‘Fallings Stars’, ‘Dark Galaxy’, and the etching ‘Reverse Galaxy’ to the ARTIST ROOMS collection.