Dr Catherine Spencer and Dr Stephanie Straine hosted a participatory discussion on Vija Celmins at 6.30pm on Tuesday 3 June at the Fruitmarket Gallery. This was the first Café des Artistes at which there was a virtual link-up between Edinburgh and an institution hosting an ARTIST ROOMS exhibition, in this case Taigh Chearsabhagh Museum & Art Centre in North Uist, which exhibited Vija Celmins's work from March to June 2014. Participants in North Uist were not only able to hear the talks and discussions but also able to join in via Twitter

Stephanie Straine is an Assistant Curator, Exhibitions and Displays, at Tate Liverpool. She studied Fine Art at University of Edinburgh and Edinburgh College of Art (2003-2008), followed by a Masters in History of Art at the University of Glasgow (2008-2009). Awarded an AHRC Collaborative Doctoral Award in 2009, she obtained her PhD from University College London in 2013, focusing on drawing strategies in the 1960s and 1970s. 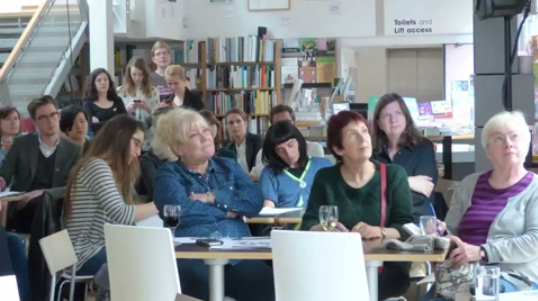