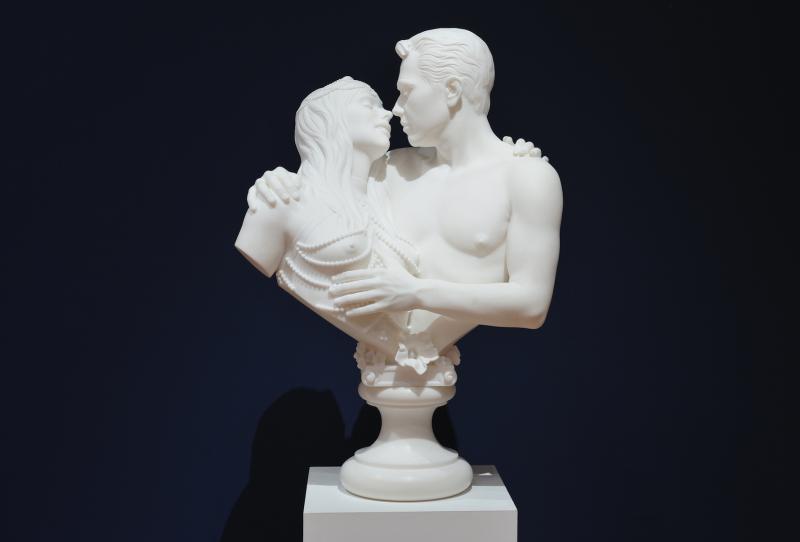 Acquired jointly with the National Galleries of Scotland through The d'Offay Donation with assistance from the National Heritage Memorial Fund and the Art Fund, 2008.

Jeff Koons (b. 1955) grew up in the environment of his father's furniture and interior decoration business in York, Pennsylvania. It seems to have been a loving, innocent, unsophisticated environment where his inspirations were the Beatles, Salvador Dali and art classes on Saturday mornings. His paintings were hung on the walls of the showroom. In 1977 he moved to New York where he worked on the reception desk, then the membership desk at the Museum of Modern Art, before selling mutual funds and commodities on Wall Street - both things seemingly appropriate for his work as an artist.

At first through his use of everyday items such as vacuum cleaners, Koons reflects on the power of consumer industry and aesthetics as a basis for art. In 'New Hoover Convertibles' he preserves a banal household object as a perfect timeless commodity in a glass case in perpetuity, like a sacred relic, its function rendered obsolete. The idea of protected perfection is also at the heart of 'Encased', from a series of basketball works where the balls achieve constant equilibrium by being suspended in liquid. These glass case works link Warhol's soup cans, electric chairs and coke bottles to Hirst's animals in vitrines. They are both lifeless and eternal, symbols of order and chaos, full of human aspirations and fears about the fragility of our existence.

Pursuing his interests in the basic dreams and desires of human society from the cradle to the grave and in the psychological, economic and social structures of the historic past Koons, like Warhol and others, takes objects from the 'real' world and renders them iconic by changing their size and turning them into High Art. In Koons's case he rescues them from their lowly status as kitsch (by inference a form of Arte Povera) and sanctifies them by turning them into art of the avant-garde.

Presented as the exact opposite of the uninflected banality sought by the abstract artists of the 1970s, Koons takes banality very seriously and invests it with all possible glory. His means of production, first in the studio and then through the demands he imposes on fabricators, is famously perfectionist. 'Winter Bears' was first shown in Koons’ landmark exhibition 'Banality'. The carved wooden figures derive from popular figurines, blown up to mammoth proportions to create a sculpture that is at once familiar yet grotesque.

Koons’ fascination with debased kitsch and Baroque styles is also found in 'Mound of Flowers', made according to the traditions of Murano glass, and the 'Bourgeois Bust', a marble sculpture which depicts the artist and his then-wife, Ilona, in a traditional style unchanged since the Roman Republic. This portrait bust is part of a larger body of work in which Koons and Illona starred in their own erotic romance, documented through a series of sculpture and photographic works. The billboard 'Made in Heaven' and the 'Art Magazine Ads' employ the standard methods of the advertising industry and were made to publicise the project.