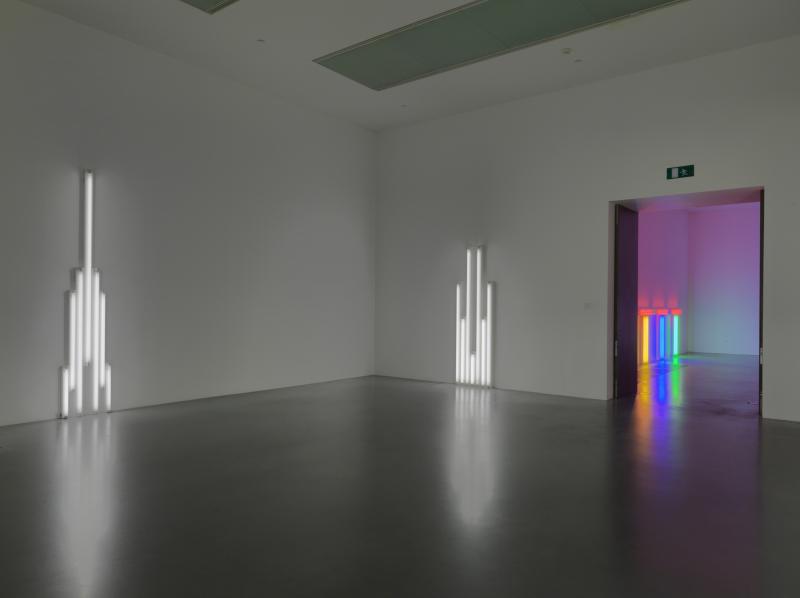 Dan Flavin (1933 - 1996) was an American artist famous for his pioneering work with fluorescent light. A principal figure in twentieth-century Minimalism, along with his friends and compatriots Sol LeWitt and Donald Judd (though he himself resisted the categorisation), Flavin used sculpture and installation to investigate the properties and effects of pure light.

His breakthrough work was 'the diagonal of May 25, 1963 (to Constantin Brancusi)', which consists of a mounted, coloured fluorescent tube fixed directly to the wall. Flavin continued throughout his career to dedicate his sculptures to artists and philosophers he admired, among the most famous of which are his series of tower-shaped sculptures named after the Russian avant-garde artist and architect Vladimir Tatlin.

Flavin’s 'monuments' (1964-1990), included in the ARTIST ROOMS collection, are among his most austere works, composed only of cool white fluorescent tubes and eschewing the brilliant colours that were later associated with his work. An art historian by education, Flavin’s work combines a powerful simplicity (he used only commercially available fluorescent tubing in standard sizes, shapes, and colours) with intellectual sophistication to create a body of work that is a product of both thought and emotion.