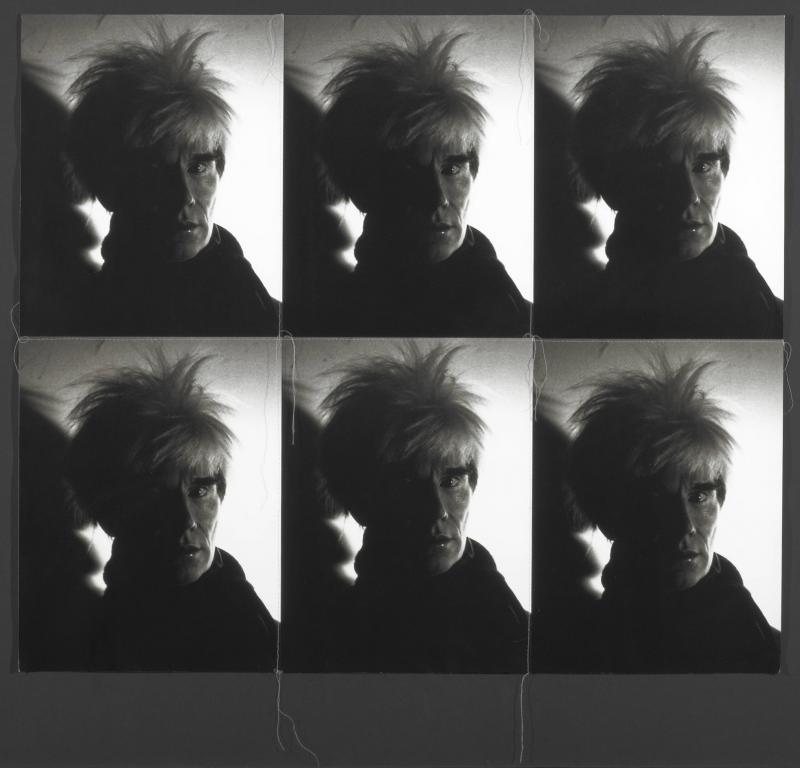 Grace being painted by Keith, 1986

Self-Portrait in a Dark Suit and Plaid Shirt, 1981

Self-Portrait in Profile with Shadow, 1981

Head with Red Gloves and Butterfly, 1959

"The Wonderful World of Fleming Joffe", 1960

The most famous proponent of Pop Art, Andy Warhol (1928-1987) took images from the popular press, advertising and other ubiquitous images such as dollar bills and signs, and fixed them forever in the public imagination through his enduring fascination with celebrity and mortality. Nearly thirty years after his death he is still one of the most influential artists of our time. His presence has fed back into the culture whence fit came and this circular energy continues to inspire creativity around the world.

Born in Pittsburgh, Pennsylvania, the youngest child of devout Byzantine Catholic immigrants from Slovakia, Warhol's childhood was dogged by illness, causing him to spend much time drawing. His father worked in construction and paid for his education while his mother, an embroiderer, gave him drawing lessons and his first camera, and later lived near him in New York.

Warhol moved there in 1949 to pursue a career in commercial art. He found a job with 'Glamour' magazine and rapidly became one of the most successful commercial artists of the 1950s, working for 'Harper's Bazaar', NBC, Tiffany and 'Vogue', among others. His first New York exhibition, 'Fifteen Drawings based on the Writings of Truman Capote', was held in 1952.

By the end of the decade Warhol was concentrating mainly on painting and drawing inspired by media techniques and popular subject matter. And by the early '60s he was using the silkscreen technique which became the basis of his working practice. He selected ordinary images and objects of everyday American life as his subjects, taking them plain and unchanged from their media sources: Coca-Cola bottles, dollar bills, Heinz soup cans, electric chairs, pop stars, newspaper photographs of plane and car crashes. Talking about the soup cans. he said he wanted to make paintings of 'nothing', which parallels the ethos of Arte Povera and related movements in Europe.

Warhol's focus on the singular image and its potential and actual replication, together with his elimination as far as possible of the traces of the hand or emotions of the artist, also echoed in the photographic and silkscreen processes he used and his designation of his studio as The Factory, implying big business, large-scale production, and a Warhol brand.

Perhaps Warhol's Catholic background may have given him an understanding of the importance of the heraldic language in Christianity and of the nature of Christian belief. He worked at his local church all his life and made important series on the subject of 'The Last Supper'.

On top of his painting, drawing and printmaking Warhol was constantly at work on film, photography, writing, publishing and making a detailed visual and/or sound record of his daily life and conversations, creating a total image of himself and his work.

The ARTIST ROOMS collection includes a staggering array of important works, representing all phases of the artist's career. Among the highlights is a unique collection of 50 early works on paper as well as the iconic multiple 'Skulls' (1976) and the multiple 'Self-portriat Strangulation' (1978). The collection includes a unique room of late diptychs as well as the celebrated four part 'Camouflage' (1986), the central exhibit in the Andy Warhol retrospective at the National Gallery of Scotland in 2007. ARTIST ROOMS also includes a group of spectacular stitched photographs and a series of Polaroid self-portraits. The collection is complemented by 126 Warhol posters from all periods of the artist's career, including his films.

The deconstruction and reconstruction of art around the world at this time also caused many artists to make themselves part of their work in ways different from abstract expressionism, amongst them Yves Klein, Joseph Beuys, Gilbert and George and Richard Long.

Making an iconic image by removing it from its context and preserving it complete and whole ensures it doesn't 'describe' a piece of our time actually 'is' our time. Althought he sources from which it sprang can age and die, Warhol's images don't look faded or dated and what looked like glamour then looks like glamour today.