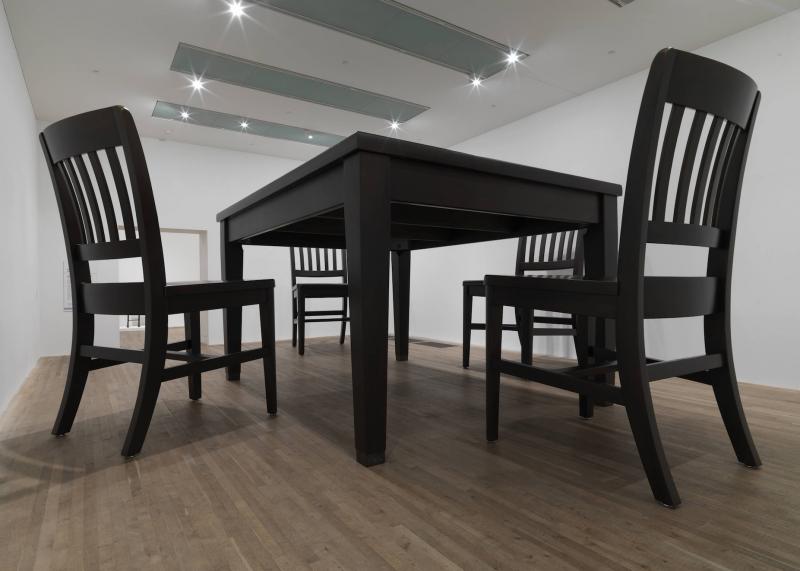 Presented by the artist jointly to National Galleries of Scotland and Tate and acquired with assistance of the ARTIST ROOMS Endowment, supported by the Henry Moore Foundation, 2011.

Robert Therrien (b. 1947) presents a world of the unexpected filled with objects which are both familiar and strange. It can seem a fairytale place of deceptively childish charm and logic where ideas can literally be translated into reality. Inanimate things can become strikingly animated, soft and light become hard and heavy and size seems out of control.

During the 1980s the artist began to make objects with simple, recognisable shapes such as jugs, coffins and doors, transforming them through a variety of media including copper, wood and bronze. This developed his engagement with the notion of the found object, addressed most explicitly in his found brick paper drawings. His work with changing scale began in the early 1990s. Some objects he uses are found, some are made by and for the artist. His use of domestic images might suggest an interest in the spatial world of still-life but his interest in the human body’s interaction with space is more connected to architecture. Therrien’s images and the objects he selects expose the hidden drama of the unnoticed, invisible, physical and mental relationships which exist in the world of human beings, between human beings and between the objects they create to help them live their lives.

ARTIST ROOMS comprises a group of exemplary works which express both the ambition and surrealism of Therrien’s practice, including a room-sized version of table and chairs from 2003 and a recent, striking installation, 'Red Room' (2007).

Tate and the National Galleries of Scotland would like to acknowledge the artist's generosity in donating two works - 'No Title (Beard Cart)' and 'No Title (Stacked Plates)' - to the ARTIST ROOMS collection.