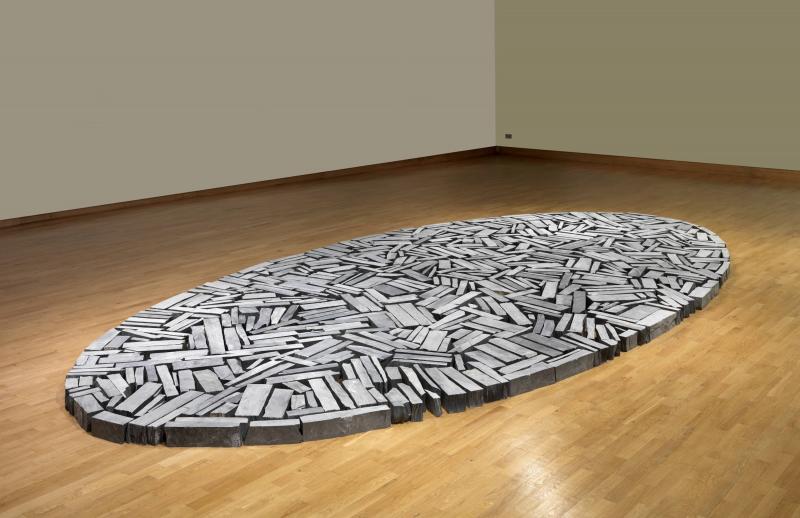 Richard Long (b. 1945) was among the foremost of a new generation of British sculptors to emerge in the 1960s who extended the possibilities of sculpture beyond the confines of the studio and gave it meaningful existence as part of the place, time and substance of which it is made. He has said "my work is not illusory or conceptual. It is about real stones, real time, real actions. I use the world as I find it."

Another revolutionary aspect of his work is the relationship between movement and time. Long’s work is rooted in his deep affinity with nature, developed during his walks in Britain, Nepal, Africa, Mexico, Bolivia, India, Morocco, Japan and many other places around the world. While travelling he may set himself specific tasks, or he may make something suggested by the landscape, such as walking a straight line for a predetermined distance, following the source of a river, or picking up and then dropping stones at certain intervals along his route. But Long never makes permanent changes to the landscapes he passes through, rather he adjusts nature’s placement of rocks or wood to form simple, geometric shapes appropriate to the place.

'Somerset Willow Line' (1980) and 'Cut Slate Ellipse' (2005), both included in ARTIST ROOMS, are two key examples of works made specifically for an indoor architectural setting. He documents his journeys with photographs, maps, wall drawings and printed texts which evoke his responses to the landscapes through which he passes.

Long has said that his aim is to explore "relationships between time, distance, geography and measurement", and elsewhere that whereas his photographs and text works feed the imagination, his sculptures feed the senses. However "both inside and outside works are made in the same spirit. The urban and rural worlds are mutually dependent and have equal significance in my work." He uses nature with respect and freedom and "makes works for the land not against it".