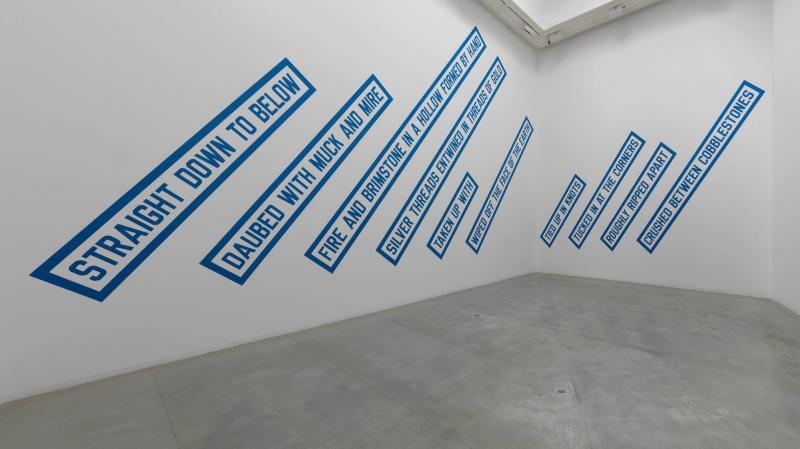 FIRE AND BRIMSTONE SET IN A HOLLOW FORMED BY HAND, 1988

Lawrence Weiner (1942-2021) was among the pioneers of conceptual art, and one of the most influential artists at work in the world. A self-taught artist born in the Bronx, in New York City, Wiener considered himself to be a sculptor, contending that sculpture is an idea which can be realised in any given material. This principle derived from the artist's determination to make art as widely available as possible: a sentence or idea is not confined to a gallery, but can be widely disseminated and adopted by its audience.

Weiner said of his childhood that 'I grew up in a city where I read the walls; I still read the walls. I love to put work of mine out on the walls and let people read it. Some will remember it and then somebody else comes along and puts something else over it. It becomes archaeology rather than history.'

He typically used language, words which have no physical form in themselves, to create the relationship between the art work and the person encountering it. Weiner's 'statements' can take many forms: as text mounted on the walls in gallery or public spaces, as books and posters, as sculptural objects, as audio or video recordings, as the lyrics to songs, even as tattoos.

ARTIST ROOMS brings together a cycle of wall text works dating from 1988. This series consists of ten statements, each suggesting a physical action or invoking the manipulation of an object or material. Each of them expresses a very physical engagement with the material world: ‘CRUSHED BETWEEN COBBLESTONES’, 'ROUGHLY RIPPED APART', 'TUCKED IN AT THE CORNERS’ or ‘DAUBED WITH MUCK AND MIRE’. The visitor is asked to question the relationship between an idea, which has no physical form and can be expressed through words, and the actions or states being described by those words. Does the artwork consist in the idea to do something, or in doing it?