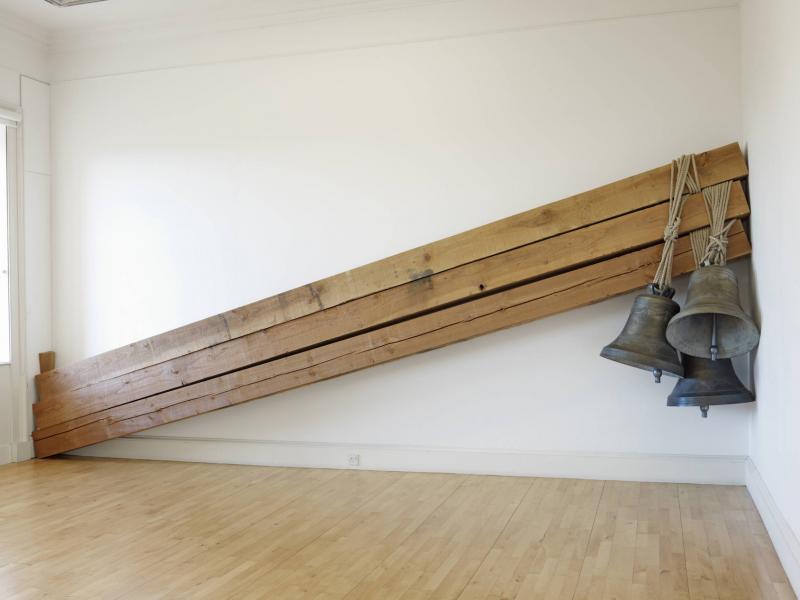 Jannis Kounellis (1936 - 2017) was born in the Greek port city of Piraeus, but lived in Rome after 1956. His first exhibition in Rome in 1960 was titled 'Kounellis Alphabet' and combined living and inert materials. He used steel instead of canvas for his paintings and applied to it fire, earth, coal, wool, plants, and live and dead animals.

In the later 1960s Kounellis became associated with the Italian Arte Povera movement which tried to free art from the conventions of that time and by using simple ordinary materials attempted to bring it closer to everyday life. The 1969 work in which he turned a gallery into a stable for twelve horses brought him international fame, and the grandeur which which he invests "poor" objects has become characteristic of his exhibitions, as has the tug between past and present, industrial and agrarian life, religious and non-religious society; things which seem antithetical to one another but exist in conjunction though not always in comfort.

Kounellis' work integrates many different art forms - painting, sculpture, music, theatre and poetry. The sculpture and works on paper in the ARTIST ROOMS collection span Kounellis' career and represent the diversity of his work. The collection includes two major sculptures involving church bells, now out of use and out of their element, referencing the role of the church in society but also the part played by bells in the life of human beings and their communities.

'Coal sculpture with glass wall' brings together the darkness of coal and the brightness of light, both altered by heat and the movements of the earth over specific aeons of time, ranging from millions of years to form the coal, to the thousands of years during which people made glass bead curtains in Greece, Egypt and other hot places. As coal was used to heat and power the cold industrial north, so the work contains within it the physical and economic history of the planet.

The largest installation in this collection is that in which an army of steel girders seems to be marching across a floor covered with oriental rugs, which could be a mosque or a domestic setting. The iron suggests one active, masculine, industrial or pugilistic approach whereas the carpets suggests a softer, more contemplative, peaceful one. Perhaps there are two sides to human beings in general, which are not a matter of gender but of temperament.