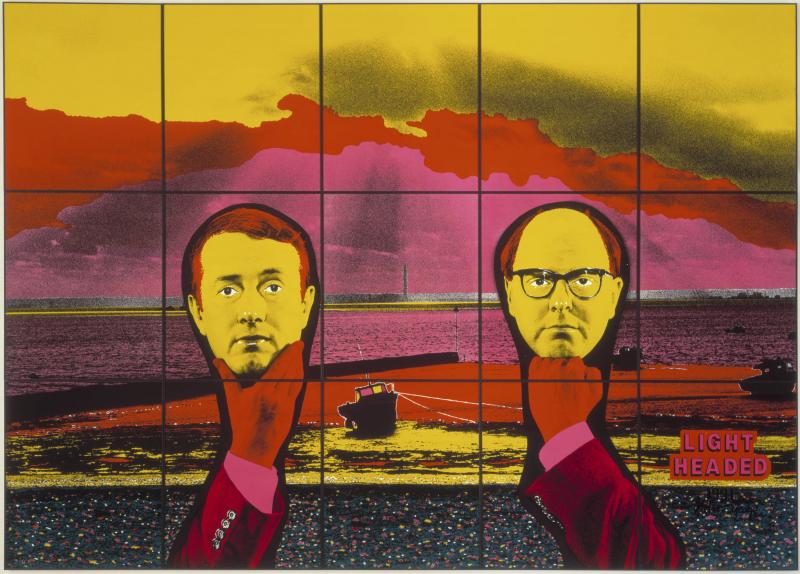 George the Cunt and Gilbert the Shit, 1969

Gilbert (b. 1943) and George (b.1942) have been important figures in the international art world since 1970. Working as a pair and presenting themselves as ‘living sculpture’, incorporating themselves and their lives into their art, they set out to provoke their viewers, to make them think and question conventions and taboos.

In the key 1970 "magazine sculpture" included in ARTIST ROOMS they smile up at the viewer with cut-out letters pinned to their chests reading ‘George the Cunt’ and 'Gilbert the Shit’. From the beginning their work emphasised the artists’ own image, their place as misfits in society and their concept of ‘art for all’.

By the end of the decade they had moved beyond the enclosed spaces of their house, their drinking and their life as artists to explore the world and the people around them in the East End of London. The ‘Dirty Words’ series focused on graffiti photographed in the streets of the city. Gilbert and George were now not just taking art to the people but incorporating the people into the art. At the same time they declared their purpose was to find and accept all that was good and bad in themselves.

The big, multi-part, brightly coloured works from the 1980s in ARTIST ROOMS come from this period of huge energy and change, when Gilbert and George were also developing new and specifically modern techniques of photography and printing to make their art appropriate to the people with and for whom it was made. Throughout the decade they also exhibited their work around the world in a highly modern way, with masses of huge brightly coloured images made from glazed panels arranged and hung according to their precise instructions.