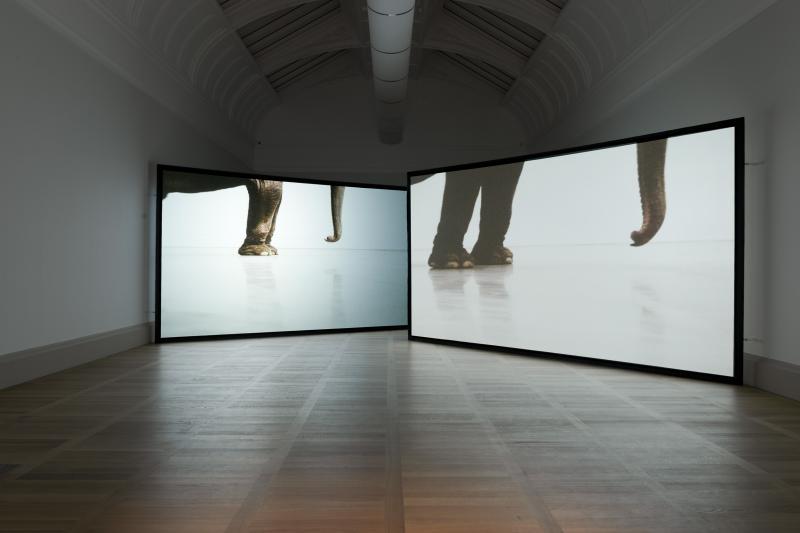 Douglas Gordon (b. 1966) is a Scottish artist, working with photographs, film, text and installations. He explores the nature of perception and memory and force us to reassess how we fabricate meaning from our experience of the world.

He uses defamiliarising techniques to encourage us to reconsider the means by which he or she processes visual information. He manipulates time and space in video – by slowing down or speeding up film, or by using several screens to create an immersive environment.

The artist’s preoccupation with memory (also apparent in the work 'List of Names' (1990–present), which itemises the name of every person Gordon can remember having met) is apparent in the acclaimed video projection '24 Hour Psycho' (1993). This work consists of a projection of Alfred Hitchcock’s thriller slowed down so that it stretches over the course of a single day. 'Play Dead; Real Time' (2003) (included in the ARTIST ROOMS collection) presents two videos on large screens, each showing the performance of a series of memorised actions (what we might in another context call ‘tricks’) by a trained circus elephant.

Commanded by the voice of an unseen authority, the elephant (suffering from an illness during the filming) struggles to fulfil the demands placed upon it. The sequence is presented from a variety of perspectives, providing an eloquent, moving insight into the nature of memory, action and mortality.