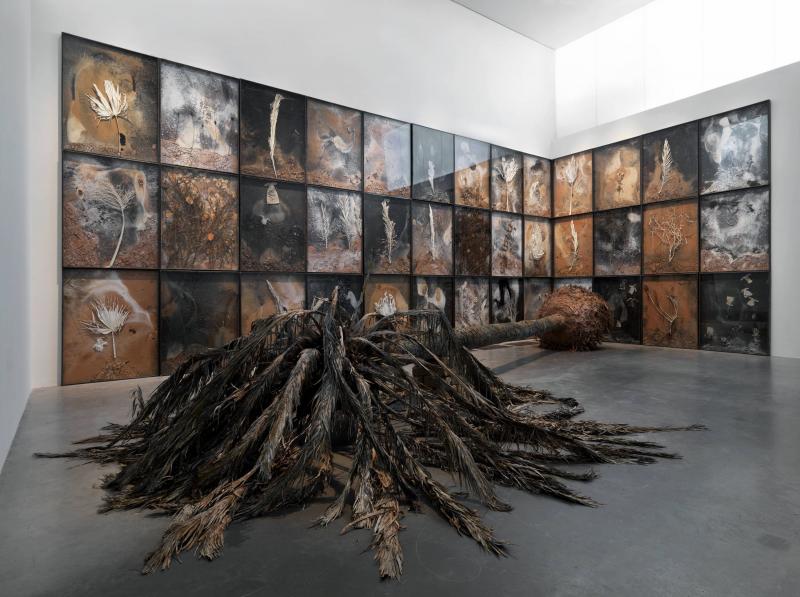 A key figure in European post-war culture Anselm Kiefer derives his art from his awareness of history, theology, mythology, literature and philosophy and the extraordinary ability to work with all kinds of materials from lead to concrete, from straw to human hair and sunflower seeds.

Born in 1945, Kiefer set out in his early work to try to understand Germany’s recent history, even in the 1960s still a somewhat taboo subject. He was interested in the work of Joseph Beuys, and discussed his work with him, but was not one of his students. Early images included Kiefer setting out on his journey, walking through a forest holding a burning branch. Later works drew on German military history, Wagnerian mythology and Nazi architecture in an attempt to grapple with the possibility of pursuing creativity in the light of past catastrophic human suffering.

Kiefer’s technique of layering paint and lead, straw, earth and other materials onto his canvases gives a visceral presence to his preoccupations with decay and regeneration. He makes literal use of those materials to make visual and descriptive or symbolic points. ARTIST ROOMS includes major works from across the artist’s career. 'Palette' (1981) expands on the recurring theme in his work that painting is equal to a burning which will cleanse the countryside and cauterize the wound inflicted by Nazism. Here painting is symbolised by a palette suspended above a smouldering abyss by a rope which is alight in several places, suggesting the tightrope walked by every artist, and especially by artists in Germany. The painting 'Urd, Werdande, Skuld' refers to the Norns (fates) of Germanic mythology whose names are Past, Present and Future and who sit by the well at the foot of the Yggdrasil (the world ash), spinning or weaving the fate of men. They are an invisible presence in the grandiose vaulted emptiness of one of the many unbuilt monuments to the delusion of the Third Reich.

After the reunification of Germany, Kiefer moved to Barjac in the south of France, and later to Paris, creating large studio complexes in each place. His exploration of revolution in generation, and in particular the women of the French revolution, began in Germany and expanded to include the role of women in antiquity. His also studied ancient belief systems such as the Kabbala and travelled widely, to South America, India, China and Australia. His painting took on global and cosmic perspectives, and he worked on an ever larger scale. He became increasingly interested in natural cycles, and in Robert Fludd’s theories about the lives of plants, the microcosm and the macrocosm, and his suggestion that for every plant there exists a correlated star. 'Man under a Pyramid' (1996) reflects the artist’s interest in exploring his mind and body through meditation and in relating it to the stars and the cosmos through the form of the pyramid.

'Cette obscure clarté qui tombe des étoiles' (The dark light that falls from the stars) is a favourite line from 'Le Cid' by Corneille which came to mind when Kiefer began to work with the sunflowers native to his new home in the south of France. ‘There was an obvious parallel', he said, 'with the black seeds on the flower and the night and the stars. The seeds were the stars. When I stuck them on a white canvas they became inverted stars, black on white like a negative.’ Kiefer’s preoccupation with the stars has led to paintings of star maps.

The monumental installation 'Palm Sunday' (2006) is one of Kiefer's most powerful installations. Addressing the duality of triumph and betrayal, the fallen palm and framed ossuary of plants and leaves which surrounds the wall suggest both death and resurrection.