Lawrence Weiner and The Mindfuls

This was the question that came to mind when I heard about Lawrence Weiner’s exhibition that was coming to Woodhorn. Art, to me, meant paintings and drawings. And this wasn’t art.

One day I received an email about a young people’s group that was going to be set up at Woodhorn. They would be working with ARTIST ROOMS and it was going to be based around Weiner and his work. It did intrigue me as I wanted to meet new people and I’m always open to trying something different, so I signed up.

On our first session, we looked at how text can be used in art and saw Weiner’s work for the first time. It was then I realised that context plays a huge part in the use of text - this exhibition sounded like it was made for Woodhorn. When I read STRAIGHT DOWN TO BELOW, it made me think about the miners and how they had to go down below to work underground. After this session, I had a feeling that I was going to enjoy being part of this group!

Over the past 4 months we have been on visits to various places, one of them being London. When we went to London, we visited Tate Modern. It was a huge building! I couldn’t really take everything in, but we managed to spot Lawrence Weiner’s work on display. The meaning had changed as it was in a different context so I interpreted it differently. The words were placed above the lifts so STRAIGHT DOWN TO BELOW made me think about how the lifts go down.

In another of our sessions, we had a creative writing workshop and we developed our own poems inspired by Weiner. I enjoyed this session because I love writing and it was amazing how a single line of text can be used to create so many others.

Using these poems, we created a film to be shown at Woodhorn at our Art Gala event on 30 March. We selected a number of lines and ‘acted’ them out to camera using a variety of animation styles. Also being showcased at our Easter event is our art guide, entitled ‘Thought Kit’ which is for other young people to help them interpret the art at Woodhorn in their own way.

Being part of The Mindfuls and working alongside ARTIST ROOMS and Woodhorn has helped to open my mind and showed me that art isn’t just paintings and drawings - it is so much more than that. 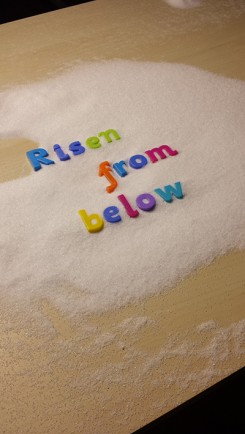